In the current , , , , , Post-Apocalyptic socio-political cultural landscape, it is vital right now that we netizens of all backgrounds and persuasions engage in rational, truthful discussion with each other – as difficult as this can often be.

Humanity has been gifted the most awesome communications tool ever created, but thus far we have been using it mostly to share pictures of cats and other funny but pointless memes…

Memes (especially funny ones) are powerful.

The internet offered us all the ability to express ourselves with unprecedented nuance, which we were woefully underprepared for. This new technology has revealed an overwhelming plethora of beliefs, ideas and perspectives, challenging everything we thought we knew about the human condition.

The difficult conversations which need to happen right now are being made yet more difficult by the phenomenon of ‘ideological echo chambers’. Harmonious group of people developing tunnel vision by virtue of social media marketing algorithms.

Overall awareness suffers when people have a narrow information base. The longer we spend in our safe little bubbles reinforcing our beliefs about the nature of reality, the harder the conversations which we urgently need to have outside those bubbles become; the more entrenched and dogmatic we become in our beliefs and the more we resist engaging in anything but vitriolic expressions of fear and hatred towards those who would dare disagree with us.

As Adam Curtis puts it, people have come to thinking that the point of it all is to simply agree or disagree with things.  So, we either hide in our ‘safe spaces’, or argue with people who disagree with us, within prescribed parameters of a controlled debate.

***If you’d rather keep your head in the sand, stop reading now***

According to the Global Peace Index, there are now only TEN countries in the world that can be considered conflict free, leading to a less peaceful and more unequal world. UNICEF claim there are currently 50 million children ‘uprooted’ around the world. 28 million of them driven from their homes by conflicts not of their making.

Austerity measures and xenophobic propaganda operations have been inflicted on the UK and other countries where we are lucky enough to be ‘conflict free’. The brainwashing and austerity is intended to persuade us to ‘pull up the drawbridge’, to ‘build walls’ and to vilify any refugees or migrants who made it to ‘are cuntry’ (sic). Rarely are these displaced peoples’ stories discussed in corporate media, nor evidently in the other corridors of The Prostitute State. 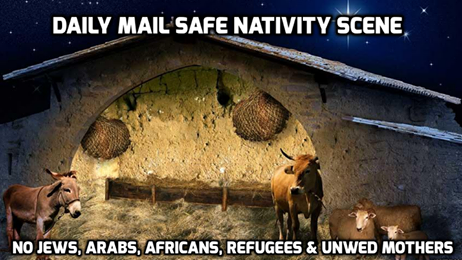 It’s bad enough now, but there is worse to come and we can only face it together.

According to the Internal Displacement Monitoring Centre, (ICDC) in its Global Estimates 2015: People displaced by disasters report, since 2008, an average of 22.5 million people have been displaced by climate- or weather-related disasters [EACH YEAR].

They put 2015’s total number of people displaced at 27.8 MILLION DISPLACEMENTS IN 127 COUNTRIES CAUSED BY CONFLICT, VIOLENCE AND DISASTERS. The high end of some predictions for the coming decades go into the hundreds of millions, displaced primarily by flooding.

We should be welcoming these people and caring for them so we can stay strong, together. But here in the UK, in Trumpistan and elsewhere, the conversations have been poisoned by the vested interests of the world’s most powerful ideological echo chambers, the 0.1%.

The internet has begun the process of democratising this tiny group’s control over the parameters of debate. We, the people now have the means to take back the narrative, but only if we all get involved in purging the fear and hate which have divided us.

If we cannot rise to this challenge now, everything will fall apart. It might look like it already has, but worse yet is on the horizon.

The night really is darkest just before the dawn. In the face of all this madness, good things are still happening. People really do change. You might not be able to change ‘them’ but you can change yourself and ‘they’ can change themselves.

Real, positive change only happens by having the conversations we don’t want to have, by challenging our preconceptions and prejudices. Only by getting out of our comfort zones and really understanding why we disagree with each other will we be able to evolve.

Humanity must start to engage with each other more intelligently and compassionately if we are to weather the coming storms. We must resolve, or otherwise overcome the differences which have divided us into these vitriolic little cliques.

If we do not start facing the reality of our interconnected struggle together, outside of our ‘safe spaces’ then we are all truly lost. We need to stay strong, but we cannot be strong if we are divided. It’s already far too late in the day. We can’t just keep arguing with each other, cheerleading the puppet politician who we most agree with as the world burns.

The information war will not be won by a top down algorithm. It will be won by the grassroots,  by brave netizens who dare initiate the difficult conversations necessary for us all to evolve.

Difficult conversations are best had with humour, through a laptop or other electronic device. So seize the memes of production and express yourself with all the lulz you can muster towards the scumbags  you are supposed to hate and fear!

If you’re being the change you want to see, be proud of yourself – share your doings with the world. Inspire other people to do good stuff and share their good stuff. Start a blog, or a vlog, livestream a demo, make a meme, brandalise something. Say what you feel. Feel what you say. Do something amazing to help unf**k the world and to prepare for what’s coming next.

Here is my technical list of mostly freeware tools, which I have been using to express myself on the internetz. I encourage everybody to pick a weapon and get stuck in.

All content from Ann Narkeh Media is FREE. If you enjoyed these ramblings, please consider making a small contribution. Thankyou.

2 replies on “Seize The Memes of Production!”

[…] We need to burst these filter bubbles, break the algos – we must reclaim the internetz, Seize the Memes of Production! […]

[…] Sieze The Memes of Production and express yourself clearly and confidently. […]